Over 13,000km were flown at this big sky event in December, including a 561km flight by Reinhard Poppl. I'm the organizer. It has always been my opinion that South Africa has the natural talent to be competitive internationally but lacks the exposure necessary. Having taken delivery of an AIR Atos VR last year and garnered a solid friendship with Europeans Toni Rumauf, Walter Geppert, Pauli Raggl and Reinhard Pöppl, I had come to realise that these guys had exactly the attitude I thought we needed in South African hang gliding to further the sport. Through Toni and I the Kalahari Big Sky Challenge was born. 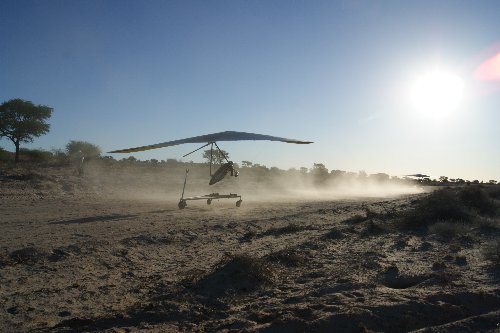 Our goal was clear: to create a serious international flying event, giving us the opportunity to learn, helping the local environment, partnering with businesses through sponsorship for mutual benefit, at a first class family holiday location from where world records were possible.

The major weather engine for the southern African region is a strong high-pressure system over the Atlantic Ocean, which periodically sweeps around the country to link up with a high-pressure system over the Indian Ocean. The outstanding and, for soaring, most important feature in this concert of air masses is the formation of a heat low over the interior of southern Africa during the summer months. Due to its elongated shape this is frequently referred to as the ‘trough line’. Warm moist air from the east where the inversion is predominantly weak or non-existent, frequently leads to thunderstorms. Hence, the interior of South Africa is referred to as the summer rainfall region. Having lost most of its moisture, the subsiding air to the west of the trough line, together with a strong high-pressure system in the upper air, produces cumulus clouds with the characteristically high cloud bases for which South Africa and Namibia are well known. 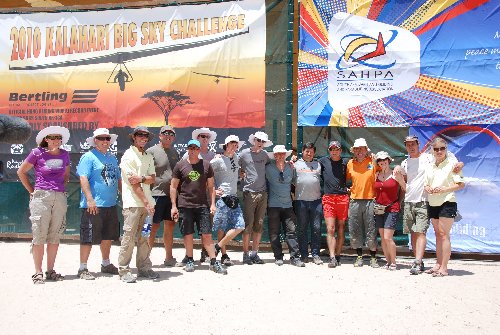 As the prevailing winds in the central regions are northwesterly the ideal location is as far northwest as possible - flights from this direction are often stopped by the sea breeze 200km from the coast. The small town of Vanzylsrus in the far northwest of the Kuraman region, just 25km from the border with Botswana, meets with all the criteria. In theory, a 1,000km flight is possible from here. Logistical constraints meant that we could only accept fifteen pilots and a maximum of twelve at once. The South Africans were: Kobus Laubscher, Egmont van Dijk, Roelof Brits, Andre Dippenaar, Niel Koopman and Oscar Plange. The Europeans were: Toni Raumauf, Timi Gabrowski, Paul Raggl, Ralph Miederhoff, Josef Schaffer, Hubert Kaufmann, Marcus Riezler and Reinhard Pöppl. These European participants included multiple world champions, world record holders, and currently four of the top ten ranked FAI Class 5 pilots.

Weather conditions were only conducive to long distance flying for the first ten days, yet still in excess of 13,000km was flown. The outstanding flights were Toni’s 441km, to attempt a new world record declared goal of 500km, and Reinhard’s 561 km open distance, bringing overall SA distance record back to hang gliding. Aerotowing was extremely rough, the only consolation was that it was even worse for the trike towing us. Neil, the Skygods from Europe thought you were amazing! The best tug pilot they have ever been towed by! 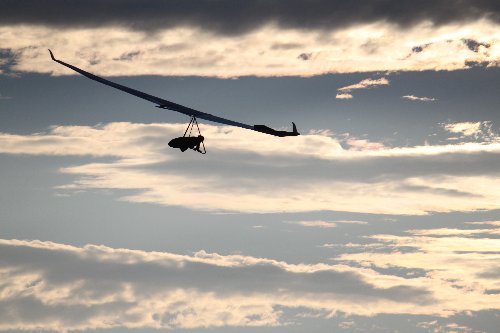 The Kalahari Big Sky Challenge wasn’t just about the amazing flying though, it was also about giving something back to the local area. A plasma-screen TV, educational film and DVD player were donated to the school. A hangar was built, the locals introduced to hang gliding and trike flying and trained as ground crew, security staff and general assistants opportunity to attract further aviation-related income and employment, which it should be able to do. Vanzylsrus is a fantastic venue for an action filled holiday in the middle of the Kalahari. The facilities are first class. Close by are game reserves, the Meerkat Manor, local shebeen, dune braais, quad rides and trails on horseback. 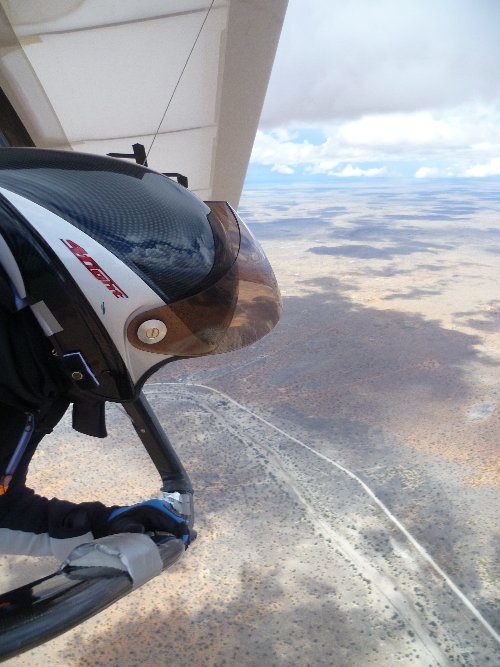