Wednesday started off with cumulus clouds forming early at two lower levels.  The bottom level with a cloud base starting off below 2,000’. At around 19:45 AMthe sky was completely black with cumulus clouds – the great precursor of a super day in Zapata.

As the general darkness of the cumulus cover began to break up into cloud streets pilots (starting with Bo Hagewood on the Aeros Combat 2) started launching and finding good lift up to the lower cloud base at 2,400’. Pete Lehmann (WW Talon), George Ferris (AIR ATOS), Dave Watkins (AIR ATOS), Mike Barber (Moyes Litespeed), Jamie Sheldon (Flight Design Exxtacy), and Alex Ploner (AIR ATOS-C) all took off and got quickly to cloud base drifting north quickly in the moderate winds.

The wind direction was quite good and no one had any problem skirting the Laredoairspace as the clouds raised and spread out a bit.

While Garyhad predicted strong winds, this turned out not to be the case.  Pilots landed mostly at around 125 miles, with Alex Ploner landing near Uvalde (160 miles) and Bo going down way off the road at 184 miles, necessitating a long retrieve (without his glider).

Jamie landed at 30 miles out (automatically setting – but not claiming – the women’s rigid world record) behind two locked gates but a short distance from our friend Rick Walker’s ranch house.  He later went in with his helicopter and retrieved Jamie’s glider.

Dave Prentice got up on his first tow into 800 fpm, that turned into 1000 fpm right to cloud base.  He raced himself into the ground not too long afterwards.  Must have got too excited.  Will Gadd and Louise flew their paragliders about 130 miles before deciding to stop.  They required multiple tows, as did Hans Bausenwein who landed near Dave.  Both Dave and Hans hitchhiked back into town from the main dirt road to our north.

We are looking for more moisture to be pushed up across the state to make for more clouds along the route.  It was clear from the satellite photos today that the clouds only went about 200 miles out.  It looks like more moisture will be coming our way on Friday.

The cloud streets were already forming at nine as we quickly went through the pilot meeting.  Unfortunately, I just couldn’t get the pilots to get going as early as I wanted.  I had decided to not fly based on the prediction for more easterly winds further along the course line (this would prove to be not quite as bad as forecast). 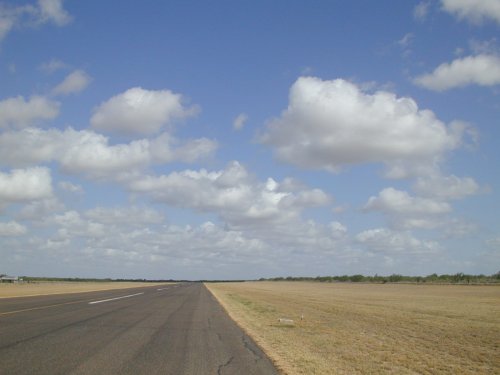 Finally, Andre Wolf (Icaro Laminar MR 700 WRE), who hadn’t flown on Wednesday having just arrived, carried his glider out around 10:30 AM. We could see six cloud streets over the airport for the preceding hour and a half.  He was the first pilot off.

Quickly Peter Lehmann (WW Talon), Mike Barber (Moyes Litespeed), Jim Lamb (AIR ATOS), and George Ferris (AIR ATOS) got into the air in strong winds.  Pilots who used the cart rolled for about five feet before they popped out.

Jamie Sheldon (Flight Design Exxtacy) took off at 11 AMbut found the conditions to be too rough and landed shortly thereafter.  Gary Osoba went up at 11:30 AMin the SparrowHawk and mentioned later that it was very rough near the airport early with very unworkable tight cores at 2,000 fpm.  It appears that it was too strong and therefore indicates that we were launching way too late.

At 3 PMwe heard from pilots and drivers far to the north.  Mike was 177 miles out at 2:30 PM(a very good distance for this time), Bo was driving for the paraglider pilots after a later retrieve getting his glider out from off the road in the hill country.  Louise was 70 miles out on her paraglider at 2 PMand on a record pace (the general class world record).

Dave Prentice was going strong.  Will Gadd get out of the paddock.  Jim Lamb was 150 miles out and George after getting low was just behind him.  Pete Lehmann was between Jim and George.  No word from Andre at 3 PMas he was on a different frequency.

Jim Lamb was reporting that the thermals were of the one hand variety so it must have calmed down as pilots went further north.  Here is what the satellite showed at 3:30 PM: 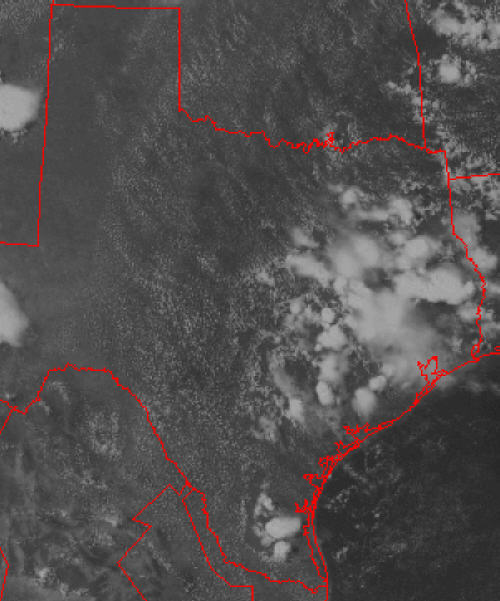 Notice that the cloud streets from Zapata continue on up into north central Texas.  They should be there in the panhandle when Mike, Andre and the others get there later today.

Louise, Dave Prentice and Santiagoa Mexican paraglider got away from the airport.  Dave was 130 miles out at 4 PM. Louise had landed.

Dave Prentice is at over 208 miles out high and circling up. He has broken the existing paragliding world record.  He has an hour and a half of daylight left.  Bo is chasing him and stopping for gas in Del Rio.  Bo has encouraged Dave to keep going as far as possible into the boonies.  It would appear that there is indeed a bunch of east in the wind.

At 4:30 PMthe word was that Mike Barber was 230 miles out heading toward BigLake(321 miles) as his declared goal.  This may be a little too much into the wind but it sure looks like he has the chance to go at least that far.

Simone has lost radio contact with Andre, and it will probably be another hour and a half before Andre lands if he is still in the air (very likely). Pete and George were still in the air although Jim Lamb was reported to have landed at 175 miles out.  We are not able to raise Chris the driver for Mike and George, nor Andrew, Pete’s driver on their cell phones. 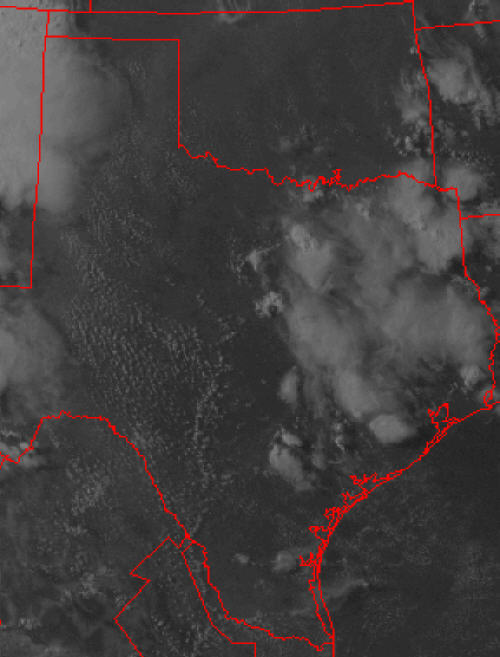 The 6:30 PMsatellite shows over development coming in from New Mexico(and the dry line) up in the panhandle between Lubbockand Amarillo.  The sea breeze coming in from the gulf and wiping out the cumulus clouds from behind.  Lots of east component with cu’s in the middle of the state where the pilots are flying up as far as 450 miles out from Zapata.

Santiagolanded at 335 kilometers (208 miles) matching the existing world record distance for paragliders.  David Prentice somehow thought that he had to land at 8:01 PMas sunset (just look out in the sky Dave) and flew 240 miles for the new world record (386 km). He landed next to a house and Bo is on his way with Louise to pick up David and hopefully get Santiagoon the way back. 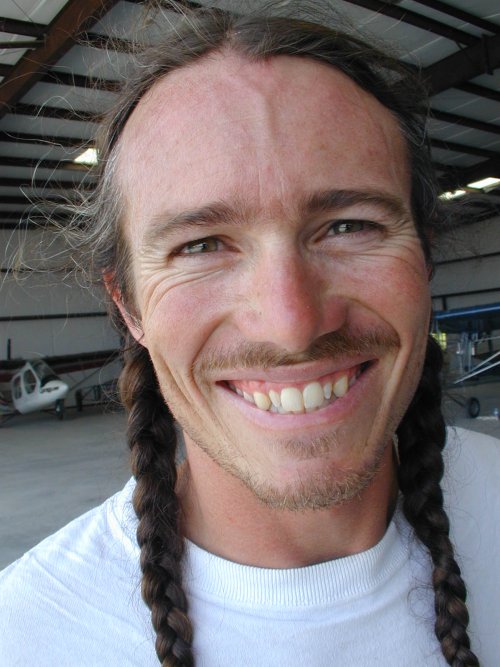 Pete Lehmann and Mike Barber both made the same distance to goal world record at 321 miles out at BigLake(the place where the movie “The Rookie” took place). Pete landed there, Mike flew over him and kept going.  At a few minutes before 8 PM, Mike was at 394 miles out from Zapata, past Midlandand high.  He has a good chance to beat Manfred’s record.  He has a 3-mile strobe and could fly until about 9:30 PM.Pete and his driver are chasing him right now.

Simone has not gained contact with Andre Wolf yet.  She can’t get her new cell phone to work and called in from a pay phone 600 km out from Zapata.  We have told her to get a motel room and call back with the phone number there.

George Ferris landed 223 miles out.  Chris, his driver, is looking for him in Loma Alta west of Rock Springs.  Jim Lamb is driving back and is just south of Uvalde.

Mike launching on his record flight

Andre has landed and contacted Dave.  We don’t know just where he is.

So it looks like the pilots have set 4 world records today from Zapata.  This on a day when pilots should have launched an hour and a half earlier.

The winds did have a lot of east in them today and so pilots were on a route much further to the west than we’ve gone previously.

Gary Osoba will be flying the SparrowHawk for world records here in Zapata.  He took it out for a second flight this morning now that the data logger is working.  He should have been ready to fly for a world record as today looks like a world record day, but there were a few last minutes fixes being attended to.

I've been using the Log_It GPS datalogger http://www.gps-logger.ch/ for a few months, it works great with my old GPS 12. With 32,700 points memory it logs every 2 seconds for over 18 hours, downloads are fast, it logs altitude as well, and works with GompeGPS, CheckIn, and other scoring programs.  Reviewing the flights over 3D maps in CompeGPS is really cool, and a big hit at pilot meetings/debriefings.

The only thing I needed for comp flying is more tracklog points.  The GPS 12 have all features I need, fits in my pod, and have plenty of battery life with NiMh cells.  I use the Log_It connected to the backup GPS, and keep it in the harness or on the keel.

Discuss "Log It" at the Oz Report forum   link»

- TRACKSERVER: A system that gives you the possibility to open flights from the Compe-GPS internet server.  There are flights from different countries.  Here is more information about it: http://www.compegps.com/Raiz/Server/Ttrackserver_uk.htm. You can also send your own flights to the TrackServer using Compe-GPS.

- Some improvements in the OLC features:

- In triangles, Compe-GPS decides if it’s valid or not, depending on the length of the distance between start and end.  More than a 20% of the triangle distance is considered a non valid triangle.

- Solved a problem in the OLC files.  Now you can send OLC files to the OLC server with no problem.

- You can sort the flights in the Logbook, according to different fields, just clicking in the name of the field.  (This only work with the MDB logbook format)

- Now Compe-GPS can read IGC files with speed air, like the IGC files created by the Brauniger Galileo and the Digifly Graviter.

You can find the new version and more information in Compe-GPS web page: www.compegps.com

The Oz Report is being read from (approximately) these locations: