Seeing the link to some movies of the early Rogallo Para-Wings from the highly experimental Dryden Research Center, your readers may be interested in some other links from the same source.

Here are some present and former HG & PG pilots and projects:

Got a flight track on the HOLC that you'd like to see in Google Earth?

Go to the HOLC and find your flight, right-click on the link to the IGC file, and select Copy Link Location (or whatever your browser says). Paste that into the Location or Address line of your browser (but don't hit enter yet!), and put the stuff on this following line in front of the stuff you just pasted there: http://ozreport.com/GoogleMap.php?type=igc&url=

Hit Enter and Google Earth should start up with your track shown!

Here's an example using one of Davis' recent flights.

Want to relive your flight?

Open up the "from the Oz Report" folder that you just got in Google Earth's left pane, then open "tracks", click on "dumpigc", then click on the "Play Tour" button at the bottom of the left pane (it looks like a standard Play button, a triangle with one point pointing to the right). If your computer's decently fast you could turn on the Terrain checkbox (note to the Prairie boys: don't bother!).

In Google Earth's menu you might want to go into Tools > Options... > Control > (check Advanced) and increase the Camera Tilt Angle to maybe 66 degrees so that you can see the horizon (unless you're IFR-only or always stare at the ground?), and you can play with the other options there too, of course.  Assuming the time intervals between your track log points are consistent and short it'll even be fairly realistic!

Dana Dow passed away Sunday evening at 9:05 PM in Little Rock, AR. His daughters Carol & Kerry were with him.  At Dana's request, an Irish Wake will be held on April Fool's Day.  Terry Presley will fly the Sterman and Christian will scatter Dana's ashes over Lookout.

More details will follow, probably tomorrow, but we wanted to get the news out immediately.

An annual condition inspection on an E-LSA (Most of our existing tugs and trikes could transition to LSA as Experimentals) may be performed either by an appropriately-rated FAA-certificated mechanic (A&P), or by the owner/operator of the E-LSA if they have the Repairman LSA/Inspection certification.  Meaning, if you have a trike or ultralight tug converted to E-LSA, you can do your own maintenance and annual inspections if you have this certification.

"(a) Flight training for compensation or hire."

(b) TOWING A GLIDER OR UNPOWERED UL FOR COMPENSATION OR HIRE."

"The Repairman LSA/Inspector is not authorized to perform 100 hour inspections."

(The wording above is taken directly from our course materials--meaning from the FAA.)

In order to do the 100 hour inspections, the owner/operator must have the LSA-Repairman/Maintenance certification or higher, or it can be done by an A&P mechanic.

This may be old news, but:

(a) it looks like E-LSA's can be used for aerotowing, no problem.

(b) only annual inspections are needed if the aerotowing is not done for compensation (i.e., personal towing, or a club).

There was no information provided regarding pilot qualifications for aerotowing using an LSA or S-LSA or E-LSA, or is aerotowing for compensation or hire vs personal, club, and/or instructional aerotowing.

All-in-all, it was great to see this information in the FAA-approved documents we received at the course.

BTW, it was great course.  We really enjoyed it and found it very useful.

Unfortunately, there is not much documentation from FAA, USHGA, EAA, and/or USUA that definitively says that's are going to go E-LSA.  Seems about 98% on track to me, though.

Today was the last day of the Top Gun Challenge, an instructional "meet" pairing Jonnie Durand and me by default with less experienced pilots to help them go cross country.  With high pressure centered to our south and east, the winds were 20 knots out of the north east.

We waited until later in the day for the mixing to occur to bring down the wind speed a little when the higher slower winds above would have reduced the on ground wind speeds.  That happened a little as we got ready to tow around 3 PM.

The high was forecast to be about 35 degrees and with the northeast wind it was pretty pleasant getting ready to be towed up. I waited until a few students were almost ready and then took off behind the Dragonfly.

The tow up was pretty rough and I was ready at any moment to release.  I did release early anyway just because it was so rough.  The thermals were tight and chopped up down low.  I had barely hung on while on tow.

The thermals improved greatly as I got up turning into completely smooth 900 fpm.  I got out of the thermal to stay low to stay closer to Dirk, my first student, who got let off below me but wasn't climbing that well.  I came back over the runway as I heard from Belinda that there had been an accident on tow.  I could just make out the folded glider to the north of the paved runway.

With the possibility that there might be a helicopter coming in, I headed south to catch up with Dirk and see if I could find him a thermal.  We was too low so when he landed I came in and landed with him to give him a ride back.

Belinda and Tove had watched the pilot, with Belinda only seeing him after the wings folded.  Most of the witnesses spoke of a loud bang.  I spoke most extensively with Chris Smith.  He said that he watched the whole flight.

Then the radical actions continued and the glider went upside down and the wings folded.  From 500 feet the glider tucked and spun.  The pilot got the parachute out, but it did not open in time to stop the impact.

The police from Albury are conducting an investigation.

Discuss "Death at Tocumwal" at the Oz Report forum   link» 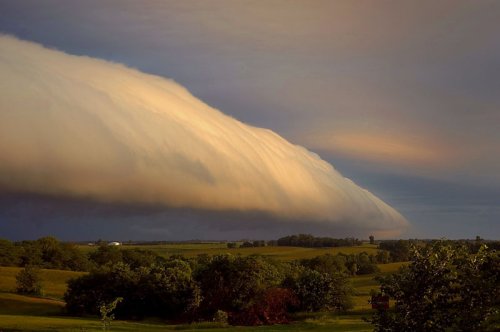 Explanation: What kind of cloud is this?  A roll cloud. These rare long clouds may form near advancing cold fronts.  In particular, a downdraft from an advancing storm front can cause moist warm air to rise, cool below its dew point, and so form a cloud.  When this happens uniformly along an extended front, a roll cloud may form.  Roll clouds may actually have air circulating along the long horizontal axis of the cloud.  A roll cloud is not thought to be able to morph into a tornado.  Unlike a similar shelf cloud, a roll cloud is completely detached from their parent cumulonimbus cloud.  Pictured above, a roll cloud extends far into the distance in the summer of 2005 above Albany, Missouri, USA

The Oz Report is being read from (approximately) these locations: